An exclusive poll of 62 of Australia’s preeminent economists — selected by their peers — finds 51 back measures to boost the take-up of electric cars including subsidising public charging stations, subsidising the purchase of all-electric vehicles, and setting a date to ban the import of traditionally-powered cars.

Only 11 oppose such measures, three of them because they prefer a carbon tax.

Six of the 51 who supported special measures said they did so reluctantly, as their preferred alternative would be a carbon price or a carbon tax, rather than subsidising “one alternative out of many to reduce emissions”. Yet Australia’s take-up of electric vehicles is dwarfed by the rest of the world.

On one measure, all-electric cars accounted for just 0.7% of new car sales in Australia in 2020 compared to 5% in China and 3.5% in the European Union.

Norway plans to outlaw new petrol car sales from 2025; Denmark, the Netherlands, Ireland and Israel from 2030; and California and Britain from 2035.

Asked whether Australia should take action to speed the transition, eight in ten of the 62 economists selected by the Economic Society said it should. 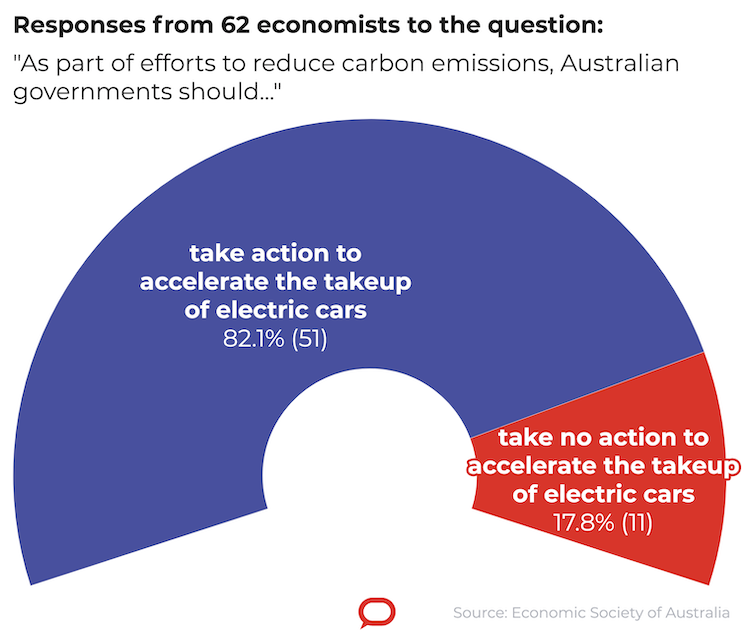 The results represent a departure for a profession whose usual advice is to avoid interfering with markets.

One participant, University of NSW professor Gigi Foster said an important question needed to be answered in order to justify government intervention: “what is the market failure here?”

The market failure was pollution, imposing costs on the community beyond the drivers of conventionally-powered cars and on the planet by pushing up global temperatures.

If it wasn’t to be dealt with by a carbon price, measures that sped up the switchover to electric vehicles could achieve some of the same effect.

By far the most popular measure of six presented to the panellists who supported government action was subsidising public charging points, backed by 84%.

The next most popular was removing the luxury car tax from electric-only vehicles. At present the 35% tax applies to cars valued at more than $69,152, and $79,659 for fuel-efficient vehicles.

Matthew Butlin, who chairs South Australia’s Productivity Commission, noted that much of Australia was not urban and unlikely to be served by charging points for some time.

Without government measures to speed the installation of remote charging stations, many buyers would be reluctant to go electric, even if most of their driving was in cities.

When they were in place, there would be a good case for banning the import of petrol and diesel vehicles, but not until then.

Others wanted to hold off on banning the import of conventionally-powered cars until Australia had a lower-emissions mix of electricity.

Network effects build on themselves

The more people switched, the more charging stations would be built and the lower electric vehicle prices would drop, driving more people to switch, and increasing the benefits of decarbonising the electricity supply.

The sooner Australia swapped over, the easier it would be to get to net zero emissions by 2050 without the need for a “cash for clunkers” style scheme to buy back polluting vehicles.

Setting 2035 as the date for banning imports of petrol-powered cars as recommended this year by the International Energy Agency would give buyers time to adjust while the charging infrastructure developed.

Tax specialist John Freebairn said electric cars were already heavily subsidised by escaping the fuel excise used to fund roads, despite the efforts of some states to plug the gap.

Sydney University economist Stefanie Schurer argued on the other hand bulky and polluting sport utility vehicles were effectively subsidised because of the tax benefits they attracted when used for work.

It took only ten years from 1903-13 for the United States to switch from horse-drawn to petrol-driven vehicles, and technology take-up was quicker today, particularly in Australia.

Other economists surveyed noted that there was much that could be done to reduce harmful emissions in addition to going electric.

Sue Richardson said Australia should impose serious limits on the tailpipe emissions of new cars. Australia is unusual among developed nations in not having such a limit, making it a favoured market for high-emission cars.

Rana Roy said a better approach would be to limit transport itself through remote working and efforts to encourage walking and cycling. Subsidies for electric cars could send such moves backwards.

When responses to the survey were weighted by the confidence respondents had in them on a scale of 1 to 10, support of special measures to drive the transition remained about as strong, backed by eight in ten of the economists surveyed. 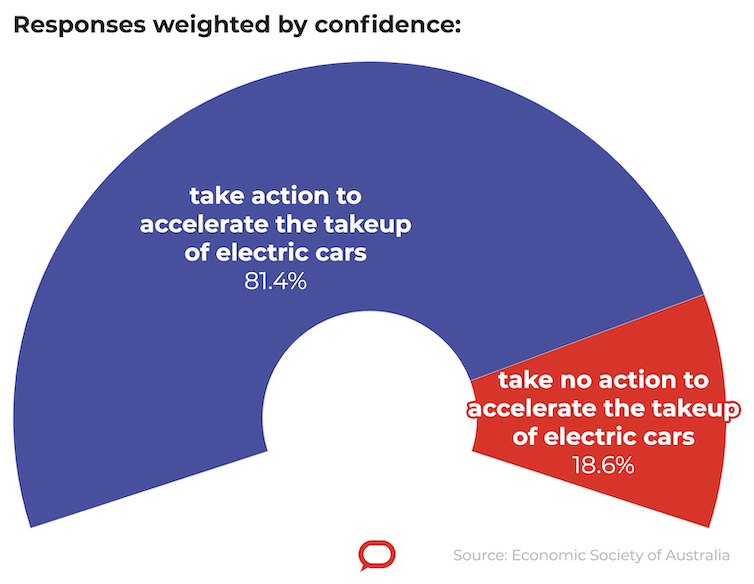 Read more:
Going electric could be Australia’s next big light bulb moment
Could electric car batteries feed power back into the grid?
Want an electric car? Here’s how to buy second-hand
The trucking industry has begun to turn electric; cars will take longer