I've always wondered: can I flush cat poo down the toilet? Why can’t I flush cat poo down the toilet? Diane, Sydney

When I was a teenager I owned a large dog, a German Shepherd. It was my responsibility to pick up his poo and put it in the bin. I would never have thought to flush it down the toilet.

So, after a quick internet search, I was surprised to find many people do actually flush cat poo down the toilet. I soon discovered training your cat to use a toilet is a hot topic for cat owners, especially for urban cats that live in home units and lack a backyard.

But sharing a toilet with your cat can put your own health in danger. So what do the water authorities say? And is it OK to flush away kitty litter?

It could be dangerous

My first reaction when I read this question was “no”. I suggest you put it in the garbage, like most people do when they walk their dogs. Then, it would be buried in landfill, along with normal household rubbish. 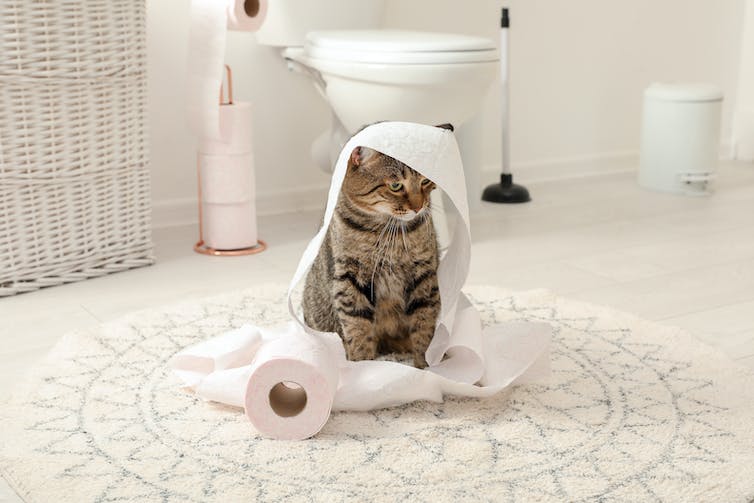 Only flush the three Ps down the loo: pee, poo and paper. The paper has to be toilet paper only.

The main reason is that poo from our pets — and other animals — can be a risk to human health. Animals can spread diseases with other species including humans (called zoonotic diseases).

A common and dangerous zoonotic disease is toxoplasmosis. Cats can carry this disease (among others) and pass it to humans, particularly through human contact with their poo.

Toxoplasmosis can cause serious health issues for people, particularly those with weak immune systems. And it is very serious for pregnant women as they can pass an infection to an unborn baby, with other potentially tragic consequences later in the child’s life.

In fact, a study published last year estimated that toxoplasmosis, cat roundworm and cat scratch disease are linked to more than 8,500 hospitalisations and about 550 deaths in Australia each year.

So it’s best you avoid sharing a toilet with your cat — and always be very careful handling pet wastes.

Cats carry diseases that can be deadly to humans.

To get an industry answer to this question, I asked five Australian water authorities that manage the largest urban sewerage systems across the country, including Sydney Water, Melbourne Water and Icon Water (Canberra).

Their reaction was generally “no”. You should not flush any pet waste down the toilet. But it was not unanimous — at least one water authority told me they thought it was OK to flush away cat poo.

There was one big issue they all agreed on, however. And that’s to only flush the three Ps: pee, poo and paper down the loo, the only paper being toilet paper.

What about kitty litter?

Every single water authority stressed the message that no kitty litter should be flushed down the toilet. So why is kitty litter so dangerous?

Kitty litter, or other materials that aren’t any of the “three Ps”, can block sewer pipes. Kitty litter is made from all sorts of materials, such as recycled products like old newspapers.

But a common ingredient is a clay material called “bentonite”. It has a remarkable ability to absorb up to 15 times its original weight. 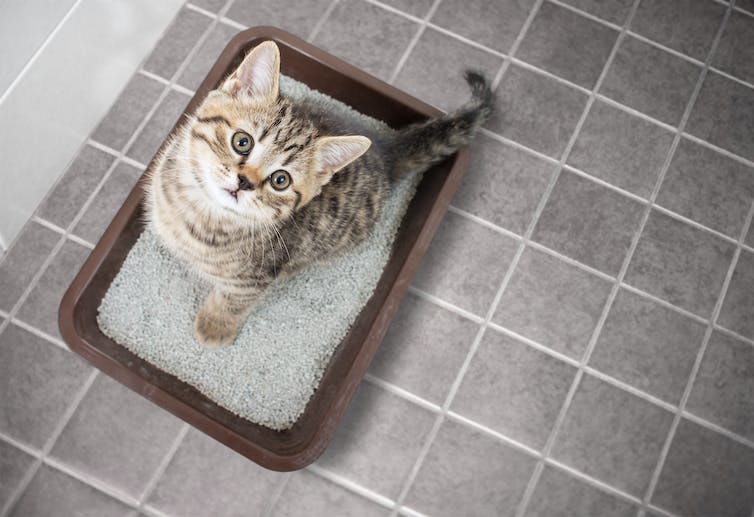 This is the big problem. If you flush kitty litter down your toilet, it can swell up and block sewer pipes, even in the pipes in your home — yuk! Don’t risk it!

Blocked sewer pipes are a horrible, messy and smelly problem. Sinks can block and toilets can stop flushing. They can also cause raw sewage to leak out. Sewage is dangerous for the environment and is very hazardous for people as it can spread infectious disease.

Toilets are not bins

Many of us need to be reminded that we should not use our toilets as flushing garbage bins.

Take wet wipes, for example. Some products are incorrectly labelled “flushable wipes”, and these are particularly dangerous as they don’t break down like toilet paper.

They can form a twisted mess in sewer pipes and block them. In fact, there’s now a new Australian Standard being developed to make sure “wipes” have suitable warning labels.

Taking it to the extreme, consider the “monster fatberg” in the UK in 2017. Thames Water removed a disgusting blockage in sewer pipes that was 250 metres long, and weighed almost as much as a blue whale.

It was a massive and expensive job to remove this. And it was caused by people putting stuff down the toilet and kitchen sink they should have put in the bin.

So while it must take impressive balance and gymnastic skills for a cat to sit on, and use a toilet (there are even books on this topic!), my advice is put your cat’s poo (and poo from other pets) into the garbage bin.

And generally, make sure you don’t flush things down the toilet that really should go into the bin. I am also yet to see evidence cats can flush the toilet themselves — I suspect this isn’t impossible, though.

This is an article from I’ve Always Wondered, a series where readers send in questions they’d like an expert to answer. Send your question to [email protected]

Read more:
Cats carry diseases that can be deadly to humans, and it’s costing Australia $6 billion every year
Don’t believe the label: ‘flushable wipes’ clog our sewers
Don’t let them out: 15 ways to keep your indoor cat happy