Many Australians can feel overwhelmed at some stage of their life with feelings of tension, nervousness and fear for the worst. A staggering 3.2 million Australians have an anxiety-related condition, with the largest increases over recent years witnessed in those between the ages of 15–24 years.

The growing field of nutritional psychiatry focuses on the effects of foods and drinks on our mental health. Despite water constituting 60–80% of the human body, it is often overlooked as a significant nutrient. A recent tweet by federal health authorities suggesting water could help reduce anxiety was received with some online scepticism.

In fact, the evidence shows water and hydration can play a role in preventing and managing the symptoms of anxiety.

We all enjoy the cooling sensation a cold drink of water provides on a sweltering summer day. Our bodies are masterfully programmed to let us know when it’s time to rehydrate. We may be nourishing our brain too.

Several years ago, a group of researchers undertook a review that focused on the various ways hydration impacts health. The results were promising.

Overall, negative emotions such as anger, hostility, confusion and tension as well as fatigue were found to increase with dehydration. One trial induced mild dehydration and found increased reports of tension or anxiety and fatigue in participants.

Researchers have also found people who usually drink lots of water feel less calm, less content, and more tense when their water intake drops. When researchers increased the participants’ water intake, people in the study felt more happiness, no matter how much water they normally drank.

More recently, researchers found water with electrolytes may prevent anxiety more than plain water, but it was noted that the placebo effect may explain this connection as study participants were aware when they were given the electrolyte drink.

The link between dehydration and anxiety is also observed in children, who are a group at risk of dehydration. Dehydration might also affect how well we sleep. Poor sleep can exacerbate feelings of anxiety.

Water on the brain?

Almost every bodily function relies on water. Because 75% of brain tissue is water, dehydration reduces energy production in the brain and can change brain structure, causing the brain to slow down and not function properly.

At the molecular level, if water levels are too low, our brain cells cannot function properly, with the brain showing signs of working harder to complete tasks.

Our cells recognise a state of dehydration as a threat to survival, leading to a state of anxiety. Serotonin is a neurotransmitter (a chemical messenger between brain cells) that stabilises our mood and regulates emotions. During dehydration, we struggle to get the chemicals required to produce serotonin into our brain.

Being just half a litre dehydrated may also increase the stress hormone cortisol, which has been associated with a range of mental disorders, including anxiety. 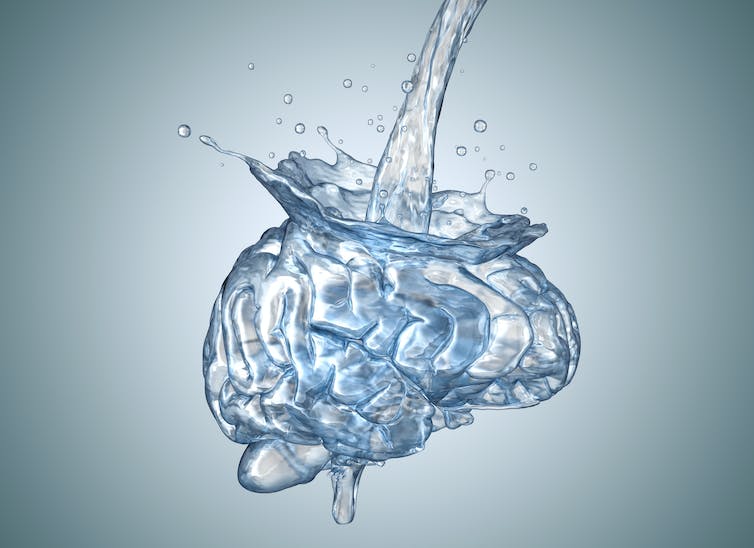 So, based on what is currently known and emerging evidence, the government health communication provides some good advice. Addressing lifestyle factors including your water intake in the context of your overall diet, physical activity levels, and sleep are important foundations that can support a person’s mental health. And there is evidence to suggest dehydration can affect our mood.

But it’s important to note there are a wide range of factors that affect an individual’s level of anxiety. No single thing is likely to be responsible for completely resolving those feelings. This is particularly true in people experiencing significant anxiety, where simply drinking more water is unlikely to be helpful on its own.