Corporate Australia has of late become a strong voice for more action on climate change. Earlier this month the Business Council of Australia, which represents the nation’s 100 biggest companies, declared its support for the federal government committing to halving its greenhouse gas emissions by 2030, and net zero emissions by 2050.

That report goes on to say that among the top 200 companies listed on the Australian Stock Exchange – the ASX 200 – net-zero commitments in the past year have “more than tripled” to about 50 companies and that this represents about half the ASX200’s total market capitalisation.

Our research on Autralia’s 150 biggest public companies supports the Business Council’s claim that commitments are growing. But there’s still a long way to go in showing evidence of tangible progress.

Based on disclosures made in companies’ 2020 annual reports, our research shows 17 reported having achieved carbon neutrality while 46 have either declared commitment or an intention to achieve net zero emissions.

Of those 46 companies aiming for net zero, 38 declared commitment to achieving net zero by 2050 and 15 of them disclosed their intention to become carbon neutral by 2030. Another eight companies did not set a time frame (which arguably makes the commitment meaningless).

That means just 55 have committed to zero emissions by 2050. 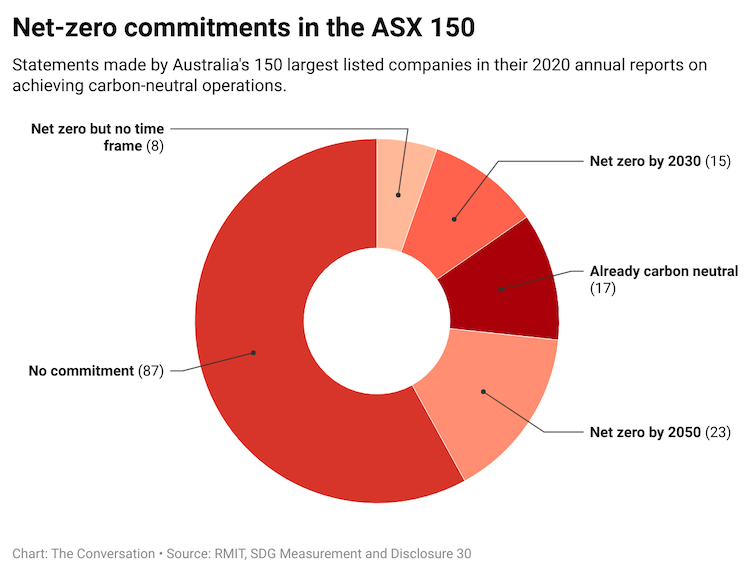 These findings on corporate climate action are part of a broader research project by RMIT University and CPA Australia into action by Australian companies on the Sustainable Development Goals (SDGs).

This framework of 17 goals was adopted by the United Nations in 2015 to provide a uniform approach to defining and measuring progress on things such as eliminating poverty and discrimination, improving health and well-being, and achieving economic progress without harming the environment. 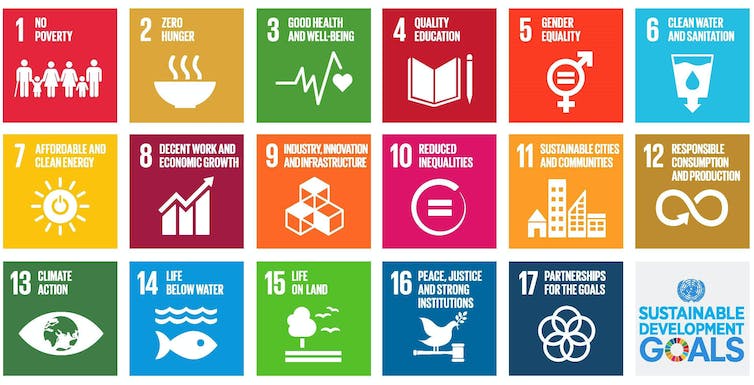 Each of the goals has a set of targets to measure achievement by 2030 (there are a total of 196 targets). On the goal of climate action (SDG13), one of the five targets is to integrate climate change measures into policies, strategies and planning.

The SDGs were originally intended for governments. But business committing and acting on them is fundamental for the transformational investments and new markets needed to promote more sustainable practices.

We have been monitoring the extent of corporate Australia’s commitment to the SDGs since 2018, based on disclosures in their annual reports. In particular we have been interested in evidence these commitments are meaningful, through companies having mechanisms to measure and report on what they have achieved.

Statements on commitments, however, are not meaningful unless supported by evidence of actual progress. This requires having a plan to turn a commitment into an achievement, setting key performance indicators (KPIs), measuring success (or failure) and reporting on results. 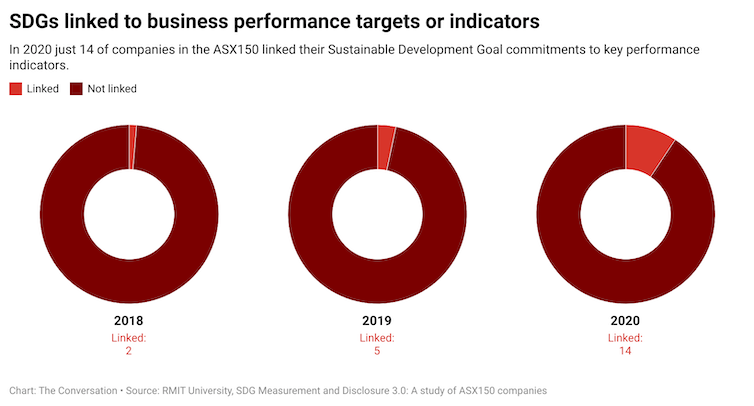 Including colourful SDG graphics in annual reports and having senior executives making public commitments is one thing. But without reporting on the actual measures to turn a commitment into actual progress, companies can easily be accused of lack of transparency or even green washing.

For corporate Australia to really claim the mantle of leading on climate action, our major companies must also lead in setting clear goals and timelines, defining measurements by which they will rate their success, and being fully transparent in reporting their progress.